We have all heard someone say “Don’t Judge a book by it’s cover”.  As a business owner, your cover is your most important marketing tool.  Without it, your business is dead.  As an author I can tell you that 80% of the book buying public only judges a book by it’s cover.  Publishers tell me that over 80% of the books purchased are never read.
The fact is the cover sells the book.  As a business builder and fixer, I can tell you that businesses have the same problem.  Look at any Gym.  People join every day so they can add the story of the gym to their own story.  It doesn’t matter if they go or not does it?  Gym’s are sold by the people that are in there working out.  Gyms make money from the people who never show up, but keep paying that monthly bill.  I am inclined to think this membership model is a major element in the formula of success of Costco, Massage Envy and most Country Clubs too.
When you are a member, you have that chapter to add to your story, and you don’t have to do a thing.  If you are in great shape, then the story of the gym is added to your cover.
The fact is that books, people and businesses have a lot in common.  The first thing a book buyer sees is the cover.  This is true for a a business too.  Landry’s CEO Tillman Fretita has this figured out.  All of the Landry’s restaurants have a great cover story.  You know a Rainforest Cafe when you see one long before you see the name.
When you see someone dressed like a bum, you normally assume they are a bum don’t you?  So if your business is dumpy looking on the outside, what to people expect walking in the door?
If you have a great staff and world class food and the cover doesn’t get people in, the only people who will care are the banks, investors and your landlord.
Now I can hear you saying “What about….?”.  If you have a great business, and want to expand to a very limited clientele, you can do it with a very subtle cover.  Club 33 at Disneyland has a simple door with a 33 on it.  Nothing else to let you know where the elite dine at Disneyland.
If you are a speaker or consultant like I am, your image can be your cover story.  I am only talking about buildings because unless you are  a chef with a huge fan base that can get people in the door no matter what, you need a cover story.
Costco, Apple, Disney and Jeep are among the companies that get this.  Apple’s simple clean lines and Apple logo aims squarely at Apple fans and whispers “welcome to the club”.   Costco’s big block buildings say, “Warehouse, expect great prices and large quantities.”  A cover doesn’t have to scream like the Rainforest Cafe, but it does have to invite you in to try the story inside.
That brings me to a restaurant in Huntington Beach California.  OPM.  For quite some time the building sat empty, and after a long buildout, the “Tap House” opened.  It closed so quickly that I didn’t even get to see it.   By all accounts, the restaurant should have been a success.  The few fans it had were shocked when it closed. 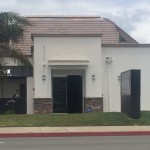 After a huge remodel, OPM didn’t fix the one big problem.  No Cover.  You can see in the picture it is just a plain white stucco box.  By the time you see the sign you are past the driveway and looking for the next watering hole.  Given the name of the Tap House, the cover could have been as simple as cutting 50 kegs in half and glueing them on the outside of the plain white stucco building with Liquid Nails.
Everyone would see 100 half kegs from the 405 freeway and know exactly what to expect and where they would find a good relaxed place for a beer.  Instead you could only see the white box.
This past week I did stop into OPM  I had to plan ahead otherwise I would have missed it and ended up at Wahoo’s again.
Dressed like a local (shorts, surf related T-shirt and flip flops) I went in looking for a relaxed local lounge.  Many smart restauranteurs, take over a good idea and fix the one item that killed the business. I didn’t expect it to be gutted and all new.  Sometimes the issue that kills a business is the owner, sometimes its the staff and occasionally even the food.  In this case I was sure it was the lack of an attractive cover.  In my perfect world I get there before close and help the owner find the path to profitability. 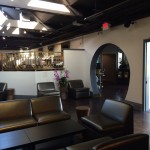 OPM didn’t change the cover and Tap House wasn’t gone that long.  Since only the sign out front changed on the building, quite frankly I was looking for the old ale house interior of the Tap House.  Ideally, I could present my proposal to consult on the exterior design.  The white no window block of stucco remained unchanged.
When I approached the very narrow walkway that goes to the front door, it was blocked by the hostess who was chatting up a departing patron.  The hostess was a pretty typical twenty something hostess in a black dress with a nice smile.  I should have realized right there that ale houses don’t have a hostess in a black dress, but I was distracted thinking, this walkway has got to go.
When I entered I noticed a small bar to the left with only one person sitting there.  The hostess quickly ran in and greeted me as did a rather casually dressed man.  The two didn’t fit.  If the casually dressed man was the owner or manager, he needs to dress up or stay in the shadows.  He was confusing the story of OPM.  If you read my blog or books you know that having a consistent story is key to success in business.
Looking around the inside, the story was a mixture of Casablanca meets middle east nightclub meets upscale east coast dining.  Very different from the normally laid back lifestyle of Huntington Beach.  Huntington Beach is one of the most popular surfing and beach towns in the US.  With the headquarters of Huntington Beach’s first Billion Dollar company, BJ’s restaurants, just a few blocks over, OPM is a standout.  Only on the inside that is.
In Huntington Beach most of the higher end (price wise) restaurants have a more casual tone than similar places in Newport Beach for instance.  OPM didn’t get the memo on the Huntington Beach dress code I guess.  More Vans and Volcom, less Tommy Bahama’s and Tory Birch.
Sitting at the bar, I was pleased to find a very nice Happy Hour menu with a $5 margarita and a couple of decent beers.  To my wife’s dismay I neglected to look at the wine menu, so look for an update next month after I take here there for her thoughts on the place.
Eventually one of the Tap House regulars grabbed the seat next to me and he filled me in on the Tap House.  He then gave me his thoughts on OPM.  At the end he really didn’t know what to think about the changes.
As a business consultant I have to admit I was stumped.  What cover do you put on an upscale blingy restaurant in a laid back surf town?  More importantly what cover do you put on it to get those laid back surfers in the door?  After all within a few blocks there is a Wahoo’s with a full bar, a BJ’s and a shopping center loaded with expensive places to get a good drink.
The wealthier clientele in Huntington Beach are normally seen in flip flops and sweat shirts all over town.  The only giveaway they aren’t surf bums is that they get into a Rolls, Bentley, Ferrari or some other exotic when they are done shopping or dining.  OPM’s parking lot doesn’t look inviting to those cars.  No Valet, no extra wide door ding avoidance spots, just a plain parking lot in front of a pretty vanilla office center next door to the white stucco block that houses OPM.
As I sipped the $5 margarita served in a short glass, I thought to myself, small price, small drink.  Eventually I paid the tab and left, a little disappointed that I did’t have a plan for it’s cover nor did I have a plan to keep people coming back for more once they came in.
The staff was nice, the quality appeared to be there, I didn’t hear any music so I can’t comment on the true ambiance, but….
Getting in my car I  looked at the blank white palette that is the outside cover of OPM and wondered what I could do to keep this place alive.  Maybe it’s the wrong story for the area now, but maybe it can attract new people to the area and be that chapter that changes the areas story?
|  No Comments
|  Category: Blog
Tags: Business Consultant, Business Focus, business story, business success