The Small Business Marketing Minute is a podcast this week about unloading your Accumu-Later.  I was on the road traveling in New Orleans Louisiana or NOLA as many of the t-shirt shops apparently call it.  During this trip I ran across an article I wrote in 2009 on an old WordPress site I built.  I decided it was time to revisit the topic of the Accumu-Later.

Early in my computer programming career I learned the term LDA which stood for Load the Accumulator.  Many years later my secretary asked me what to do with a bill and I said “Toss it on the Accumulator”.  I was thinking in computer terms and she laughed and said “When they call, how much later?”.

That made me realize that my pile was really the “Accumu-Later” because it was all the stuff I was going to get to “later”. It is a fact of life, things pop up that we can’t deal with right when they happen.  There are probably two dozen books out there telling you how to handle that pile on your desk. 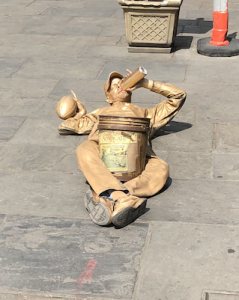 Are you playing dead and letting your “later” pile grow?

One says to “do it, delegate it, date it or dump it”.  Another says date it or shred it.  I haven’t read them all but there really can’t be that many other ways to deal with it, can there?

After years of learning how to squeeze more time out of the day than just about anyone I know, I have learned the importance of propinquity and unloading my Accumu-Later.   I’ll cover propinquity at length soon.  I was just watching Brendon Burchard talk about his new studio and he makes my point exactly.

Todays Marketing Minute, isn’t about marketing at all, it’s about a quick way to unload that pile of things accumulated in the “later” pile.  Every time you look at that pile you add a little stress to your day and make a new excuse for not looking at it.  Wouldn’t you like to clear that pile out?

« Are You Too Busy To Take Care Of Business? Do You Really Understand Search Engine Optimization? SEO? »